Skip to content
An unofficial interactive MRT Map of Singapore with additional LRT lines and bus interchanges, links to landmarks near the Marina Bay area and other transportation types.

River & bays are marked with dots

Tap Out to Transfer

Click to download an image below of the MRT Map for Singapore to your device for offline use. Choose between our colorful maps with dark and bright background color, or you can go to the LTA website for an official MRT map. 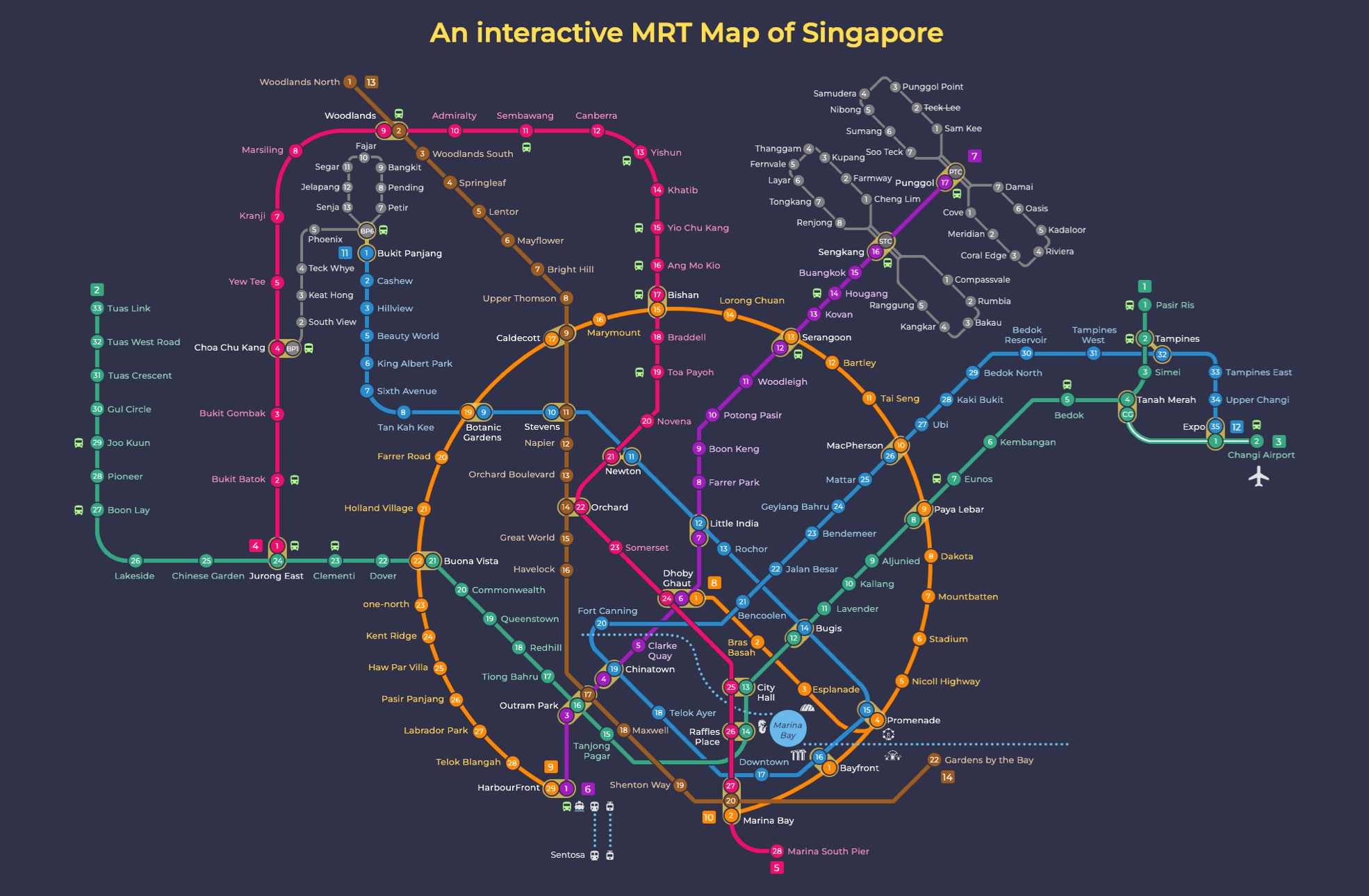 The official maps can be found at the website for the Land Transport Authority in Singapore. The maps are available in multiple languages.

You can download a PDF or image of the map at the Land Transport Authority’s official website.

Other transportation types on the MRT Map

The MRT Trains cover most of Singapore and will take you conveniently to every corner of the island.

If you want to reach other more specific areas it’s easy to switch from the underground trains to the green colored public buses at the interchange stations, marked with green bus icons on the map.

For journeys by the ocean routes you can switch to the Ferries from the HarbourFront MRT station.

Here you will find the Harbourfront Centre and the Singapore Cruise Centre with ferries going to the many islands nearby and other neighbouring destinations in Malaysia and Indonesia.

Take the Sentosa Express monorail from Singapore mainland to the Universal Studios Singapore and the beautiful beaches of Sentosa island.

Aside from the monorail there are the orange Sentosa buses and also the Beach Shuttle available for getting around while on the island. More info at: sentosa.com.sg

The Singapore Cable Car is the perfect transportation method for tourists to combine the 15 minute commute with amazing views of the Keppel Harbour area.

There are several taxi services to choose from in Singapore. Use Grab, the Uber of South-East Asia. Or SMRT Taxi, a great local taxi option for getting around easily.

Changi Airport, a tourist attraction by itself. Make sure to save some time to explore the beautiful gardens and other attractions when arriving or leaving Singapore.

The Marina Bay area and the well known landmarks of Singapore can easily be reached with four of the six MRT lines. In a few years from now, the Thomson East Coast line will also pass through this area.

If you are not staying at the Marina Bay Sands then make sure to visit their skybar and restaurant Ce La vie to enjoy the spectacular city sunsets and skyline lights.

Singapores iconic symbol can be found at the Merlion Park waterfront in Fullerton, a short walk from the Raffles Place MRT station.

Also make sure to visit or book a room at the famous Fullerton hotel, a grand neoclassical landmark built in 1928, nearby the Merlion.

Theatres on the Bay

Also known as Esplanade. It is a performing arts centre for everyone. Explore the centre to get entertained, engaged, educated and inspired through the arts.

Nearest MRT station is Esplanade on the Circle Line and City Hall, which can be reached with the North-South or East-West line.

The enormous observation wheel in the vicinity of the river gives you the perfect bird’s eye view of Singapore. The nearest MRT station is the Promenade station which can be reached via the Downtown Line and the Circle Line.

Besides the observation wheel you will also find other fun-filled activities at the venue.

Gardens by the Bay

A magnificent nature park spanning 250 acres in the middle of the bay area with multiple gardens and the famous Supertree Grove Trees is a must see when visiting this amazing city-state.

The Singapore river is marked with the blue dots connected to the blue Marina Bay circle on the MRT Map.

The river is perfect for taking cruises to discover landmarks and other attractions. Or just for taking a calm ride with a river taxi to your destination and avoid traffic jams on the roads.

How did it all start and what’s in scope for the future? Here’s some interesting facts about the Singapore MRT map and the Mass Rapid Transit system.

It all started in the early 1980’s when the first section of the MRT started operations on November 7th in 1987. It was a section of the red, North South line that spanned across six kilometres (about 3.7 miles) and consisted of five stations. Within the following year at the end of 1988, 20 more stations had been built. The final stage of the initially planned lines we’re finalized when the Boon Lay station on the East West line was consecrated a few years later, two years ahead of schedule on July 6th 1990.

The first MRT map of Singapore displays the two lines stretching from east to west, and north to south with the additional branch line operated between Jurong East and Choa Chu Kang which was a seperate line until the commencement of the Woodlands Extension in 1996 when it was merged with the North South line.

Singapore’s MRT system is split between two public transport operators. The SMRT Corporation Ltd (SMRT) and SBS Transit (SBS). The operation hours are the same for the entire system starting 5.30am and is operative until around midnight every day, weekdays and weekends.

During the peak hours from 7am to 9am the train frequency is 2 to 3 minutes and approximately 5 to 7 minutes during off-peak times.

There will be some changes to the operating hours during the first quarter of 2021 from January 1st to 30 April 2021. Train transport services from Woodlands North to Woodlands South on the Thomson-East Coast Line will close earlier at 9.00pm daily from Monday to Sunday. The services will also start at 6.30am on weekends (Saturday and Sunday), one hour later than normal.

Singapore’s MRT with all its transit lines combined, makes it the costliest, busiest, oldest and most comprehensive MRT system by length of route in all of Southeast Asia. And is also known for having the longest stretch of fully automated network of railway lines with driverless trains in the world.

MRT stations on the map

To make it easier for people to find their way down under at Singapore’s MRT stations, the stations do not only have names but are also given codes based on the line name and the order in which the stations are placed on the map for that specific line and route. Also the interchange codes make it easier to find stations where you can transfer and switch trains to another MRT or LRT line. (The codes are described further up on this page.)

Most Singaporeans and tourists usually do know what the name of the station is where they need to go. But what they might not know about the station names is that some of them have an interesting history and background story for how it got the name that it has today. For example the station Dakota, in the Dakota region on the Circle Line was named after the numerous commercial Dakota DC-3 aircrafts. If interested there is an article about these stations at locomole.com

Another interesting fact regarding the stations is that most of the ones below ground are hardened and deep enough to serve as bomb shelters, built to withstand aerial bomb attacks.

There are several options for buying tickets for the MRT fares. Tickets can be bought at all stations from the General Ticketing Machines (GTM in short) easily with a Visa or MasterCard.

For tourists there is also the option of buying a Singapore Tourist Pass which is a special EZ-Link stored value card. The card can be purchased for one, two or three days and allows you to utilize the MRT and all other public transport options unlimited times during these days. Another similar option is the NETS FlashPay card which can be used for both traveling and shopping.

There are also smartphone app service options for your iPhone or Android device. SimplyGo is one option. Then there is also the SMRTConnect app designed to offer transport related information for iPhone and Android.

For more information and pricing please visit the Singapore Tourism Board’s webpage about how to get around in SG. There are also useful step by step guides on YouTube for how to buy tickets for the MRT and tips on how to get around with the trains.